Most Digital Cinema Packages contain an entire feature or trailer. Sometimes, however, a “Supplemental” Digital Cinema Package is sent with an alternate reel, different language, or other features. This “Supplemental Package” does not usually contain the entire feature; in these cases, both packages are necessary to run the feature as intended. In order to differentiate package types and the CPLs associated with them, i.e., to know if a package is likely to contain an entire feature or a partial one, a code is added at the tail of the CPL Naming Convention. There are two codes of this type:

OV = Original Version (OR it may be left blank)

VF = Version File (“VF” as the package type only if it needs assets from another CPL.) 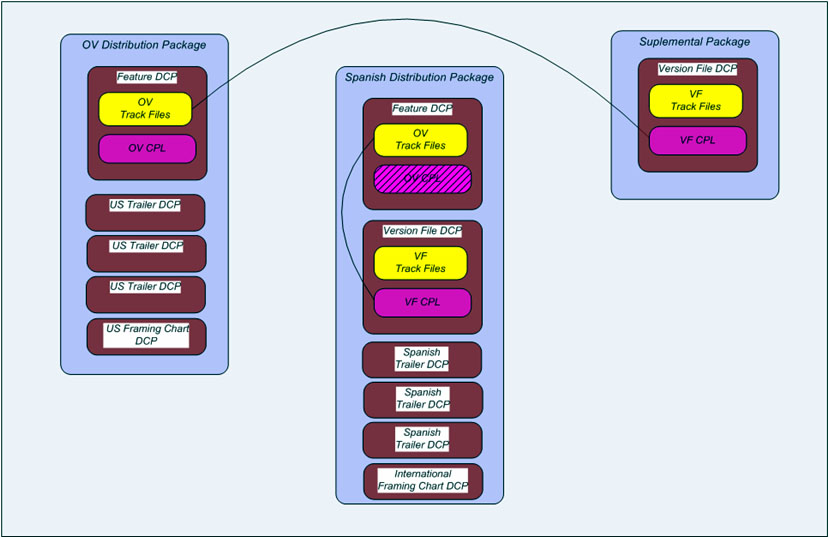 
There are certain rules that must be applied when labeling OV and VF files.

Every feature version will be numbered in the Content Type field. For example:

Although there is the original OV file for the first language version of a feature, there can also be additional OV files for Generic International Versions. These Generic Versions can be either texted or textless, and should be coded in the Territory Field of the Naming Convention as follows:

The original English language version for the US might be titled:

The Generic International Texted version of the feature has its own separate OV. It’s labeled: INT-TD in the Territory Field, and FTR-2 in the Content Type Field:

The Generic International Textless version has its own OV as well. It’s labeled INT-TL in the Territory Field, and FTR-3 in the Content Type Field:

Note: It is extremely important that you differentiate all of the OV files with different version numbers in the Content Type field.

You do not need to create a new OV file, however, for each localized version of a feature. This can be done using an existing OV file, in concert with a VF or “Version File“.

The DCP of the original US, English language version might be labeled:

For the French version, you can create a supplemental package with a version file containing the changes. This might be labeled:

The number 1 in VF-1 indicates that you need the OV file of FTR-1 (Feature Version #1) in addition to the VF-1 file in order to play the new version of the feature correctly. Both files played together will create the French version. Note that the feature version number in the Content Type field has not changed.