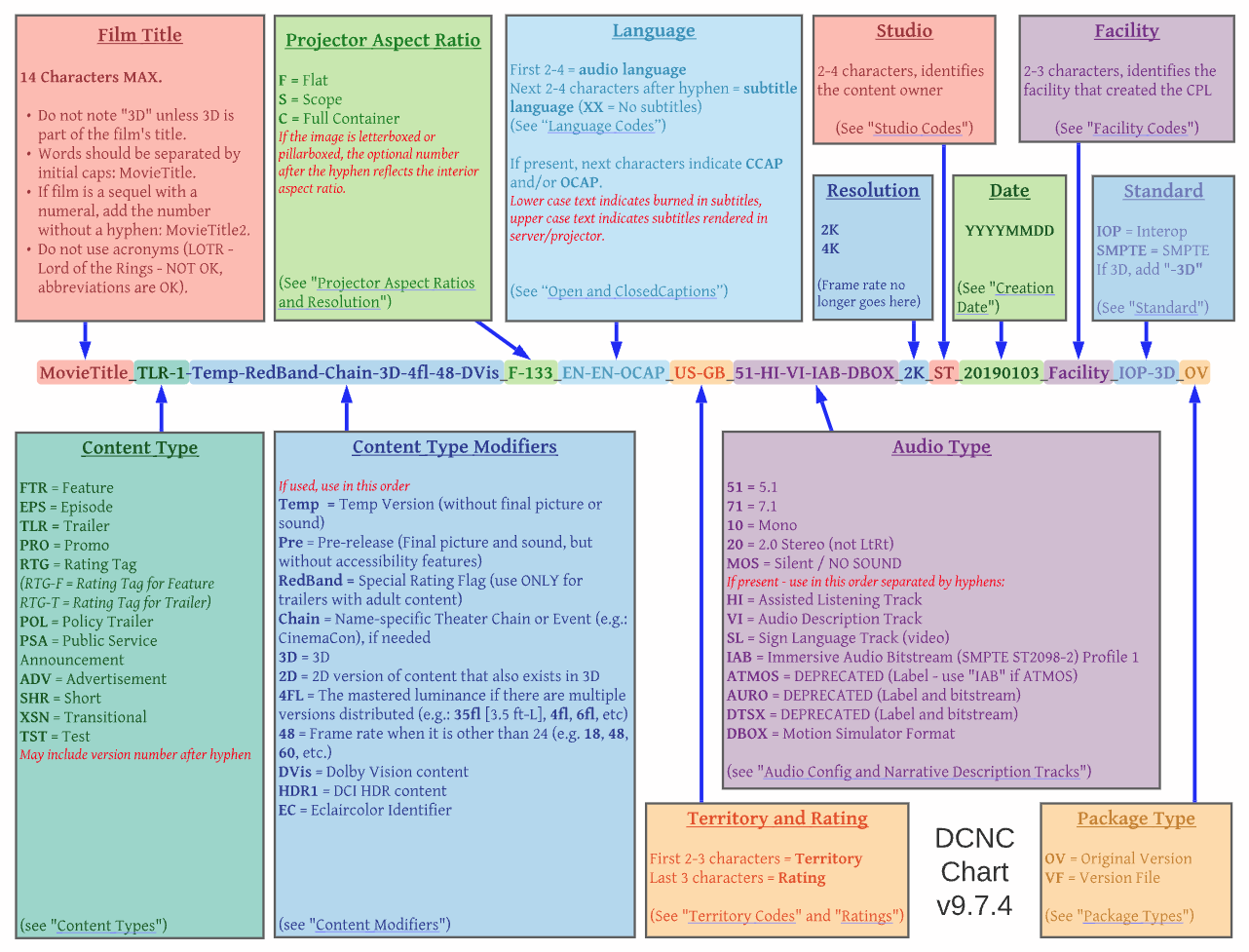 If you are already familiar with the Digital Cinema Naming Convention (DCNC), [Click Here] for general tips and updates.

The information in this site is used to create a text string that describes a particular CPL for a particular version of a movie. (The 5.1 or 7.1 audio version, the French or English version, etc.) This text string is used to populate the ContentTitleText of the CPL. Today most servers and theater management systems present this text string to the user and the operator uses this site to decode the ContentTitleText string. This will continue, but some systems will read the CPL Metadata directly to better inform the user of the specifications of a particular version of the movie.

There MUST be an entry in EVERY field. Some systems count the number of underscores to parse the information (NOT RECOMMENDED – BUT it’s done). If you have a non-relevent field, fill it with the letters NULL or see the field's details page for more info.

The Digital Cinema Naming Convention is evolving with the addition of new terms and modifications to existing terms. ISDCF is the arbiter of modifications to the convention. In general, requests are made to digitalcinemanaming@isdcf.com and are reviewed at the next ISDCF meeting. No significant modification is made without discussion at ISDCF. The official version is always this on-line version.

URIs and Universal Labels that are found in Digital Cinema Packages in general, and in CPL Metadata in particular, but are not otherwise specified by SMPTE engineering are described at https://isdcf.com/register/

Do you want to SEARCH the site? Use Google Search site:http://isdcf.com/dcnc/: (search term).

Some Digital Cinema servers only show a limited number of characters on their display screens. If the title of a composition is long, much of the information may be cut off or not visible unless you scroll to a second page. This makes locating a specific composition difficult if you have multiple titles. It’s especially confusing when you have multiple trailers as well as the feature with the same name.

If a feature composition were labeled:

Then Digital Cinema Servers that only display 40 characters would only see:

Is this the feature or a trailer? Is it flat or scope? What language is it? No one can tell if the information is cut off.

The studios and the Inter-Society Digital Cinema Forum created a “Digital Cinema Naming Convention” to be used for the text that goes into the “ContentTitleText” element of a composition playlist.

For those of you not familiar with the Naming Convention, it has two primary objectives:

To achieve these ends, most of the information is abbreviated — including the movie title if necessary — and most of the abbreviations are standardized.

ATMOS USERS: Expect a change in the way Atmos content is labeled! IAB (Immersive Audio Bitstream) is the SMPTE standard for Immersive Audio. All Atmos systems can play the IAB track. Many authoring companies are planning to stop labeling ATMOS and using the IAB label only.